Although I am essentially armchair-bound with a nasty little nasal bug, I could not let today, International Women’s Day, pass without some comment.

I happen to agree with author Caitlin Moran, who wrote, in her book How to be a Woman:

Without feminism, you wouldn’t be allowed to have a debate on a woman’s place in society . . .”

Nor would I be allowed to operate this blog, choose to stay at home (at least for the first few years) to help raise my children, attend college for a higher education, or, indeed, to leave my hearth to pursue anything other than shoppin’, baby-birthin’, and other domesticatin’ duties. 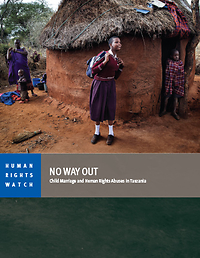 As of 2015, girls worldwide, for instance, in Tanzania, Africa, are still forced into marriage. Human Rights Watch has a report on child marriage/human rights. Photo © 2014 Marcus Bleasdale for HRW.

Said another way, International Women’s Day (IWD) is an outright necessity. Yes, it’s Women’s History Month throughout March, but I wonder how many of us in the West (especially in the United States or Canada) can envision what being a girl or woman comprises in, say, China. Or Tanzania. Or India. Or Ecuador. Or a hundred other places or circumstances around the world that can be named with some fluidity. For some reason, Steubenville, Ohio; the dorms at Vanderbilt University; and NFL wives come to mind in the American context.

In short, as long as there are Jyoti Singhs in the world—far, far too many of them throughout history—whose light should be fiercely guarded and then raged against when it is monstrously snuffed out—there will be feminism.

But we are rocking the boat, shaking the tree, and talking the talk. So get used to it.

But don’t listen to only me on this matter. Moran is a good start if you’re looking for something modern and womanistic.

If you want something a little more in real-time, there have been some fantastic meditations on feminism, the need for IWD, the documentary called “India’s Daughter,” about the gang-rape and murder of Jyoti Singh, and much more just today, 8 March 2015. For those who’d like to do a search, this subject is also earmarked with the following hashtags: #womensday #IWD2015 #MakeItHappen #internationalwomensday

And I will highlight just a handful of springboards to immerse you in the current wading pool surrounding women’s rights worldwide: Suzy at Someday, Somewhere writes about Jyoti in “Let Her Light Shine On”; Corinne at Write Tribe offers a list of compelling quotes in “Use Your Voice”; the photographers of National Geographic offer a stirring pictorial account of women worldwide in “Portraits of Strength”; and, for some historical reading, activist and birth-control advocate Margaret Sanger’s writings and speeches can be found at NYU or here online if you’re not in New York.

In approximately the time it’s taken you to read this post so far, at least one woman or girl has been sexually assaulted in the United States. Figures vary planetwide, but the World Health Organization reports the following:

based on existing data from over 80 countries, [researchers] found that globally 35% of women have experienced either physical and/or sexual intimate partner violence or non-partner sexual violence. . . . International studies reveal that approximately 20% of women (and 5–10% of men) report* being victims of sexual violence as children.

This Grendel of physical and mental violence has to stop. Come what may, we all have to unfetter our voices against misogyny, rape culture, and the oppression of a significant segment of the world population. Let sunlight and speech be our disinfectants, as well as our giant-slayers.

*Emphasis mine, as reported rates of sexual violence, rape, and incest are notoriously underreported.