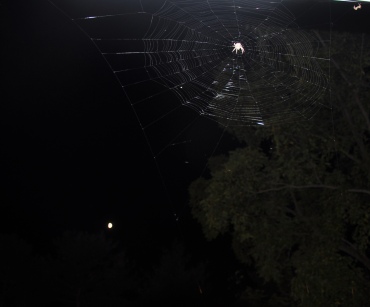 Can you spot the second spider? The first certainly seems bigger than the moon.

Despite the annus miserabilis (yep, I meant that) on many fronts, there are good things about, too. Thank goodness.

I’ll do “markets” a little different this time. Once I get more sophisticated (maybe someday ponying up for the cost of a ‘real’ WordPress or other writing site), perhaps this might grow and improve and transmogrify. First:

Apart from your posts, which I’m still trying to catch up on after the Great Computer-Cord Fry-Up of August 2016, in which the little adapter box thing went bzzt (and my battery had no juice), here’s some notable writing (news and otherwise) you might enjoy or find helpful:

As ever, let’s go out there and  . . . get rejected! And, a la Samuel Beckett, get rejected better the next time.