Even sequestered in the barracks post-sortie, I’d heard whispers about the torched orphanage.

Remembering the spat platitudes—innocent casualties are inherent in war—I sneaked into the commander’s quarters.

With each thunderclap of those awful words, fingers cinched tighter.

This was written for the Grammar Ghoul Press Shapeshifting 13 (challenge #67). In this prompt challenge, you are tasked with writing a microfiction piece or poem in exactly 39 words and using the terms orphan and inherent. I don’t know if mine qualifies, as I lengthened it to orphanage, but regardless, give these other writers a read to see how they’ve spun the terms. Further details at the link if you’d like to participate, but you have to do so by Sunday evening.

Finally, if you can, please consider helping a fellow human being. In your neighborhood, in your city, on your continent, or on this planet. Here are two stories, each listing a plethora of links (some duplicated) to organizations doing work to help Syrian refugees (whose plight prompted my microfiction).

Hello, y’all. This post is two-fold (or more; I’m sure I can summon other valid reasons).

First, for those who don’t know of them and who enjoy writing micro- or flash fiction, I’d like to point you to Grammar Ghoul Press. They sponsor weekly prompts of varying microfiction lengths that usually feature a word, phrase, and/or photograph to get your creative ichor flowing (within or without, if you write horror fiction). Full disclosure: GGP were kind enough to publish a poem of mine in their magazine last year.

Second, I was really snared by their call for 39-word stories,

from last week, because of the following large photograph. I had a ride-on horse, back in the day, at home who looked very similar to this chestnut store model. So, even though I missed the fiction call and didn’t honestly want to interfere with the voting process (since concluded), I’ve decided I would still like to publish what I wrote. It is heavily influenced by one of the books I’ve been reading lately, with a doozy of a long title: The American Museum of Natural History’s Book of Dinosaurs and Other Ancient Creatures. In particular, I looked to the Equus scotti entry. This genus contains the so-called modern horse. Here’s a brief taste of more information on the North American wild horse’s disappearance and the resurgence of the horse on the continent.

And now, here’s the photograph, posted by Tony at Grammar Ghoul, for the “Shapeshifting 13” challenge #59. Be sure to participate in GGP’s new challenge running through July 3rd—challenge #60—with an entirely fresh prompt. Following this photo by an unknown artist, my brief story (which actually is different than what I had written; due to a computer glitch and end-user failure, I lost the original copy). Anyway, I hope you’ll enjoy it.

I should be grateful for preservation, but I’m not.

I used to be alive. Now I’m lame. In darkness. Dust clots my nostrils.

When I regain corporeal form, I will lead my species in rampage. Equines will prevail again. 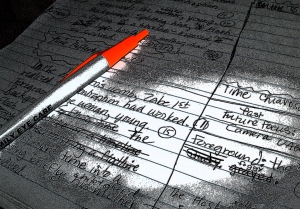 You’ve heard of Grammar Ghoul Press and their flash fiction depot, yes? If you haven’t, then get thee to the punnery straightaway.

They hold a number of weekly writing-prompt challenges: a mutant 750-word one, a 66-worded chimera, and, next week (around May 13th), END_OF_DOCUMENT_TOKEN_TO_BE_REPLACED

Qu’eethi pressed a naso-orbital bone to the substandard instrument. The outer-planetary object would be making its descent soon, and Qu’eethi was watching. Dorsal salivary ridges, as phantasmagoricized as Qu’eethi, underwent piloerection as the nimbus came into view. Had Qu’eethi been on ancient Earth, the object’s make-up would’ve been clear: discarded spacesuit, minus occupant.

Qu’eethi hoped they didn’t have another sticky collide-o-scope event on their hands’ hands.

The kaleidoscope pun (and attendant image of an alien peering through a telescope of some kind) arrived almost instantly when I read the Chimera 66 #11 challenge word. It then became a matter of how to spackle a decent microflash around the word. I’m not sure I succeeded—if only I had about five more words!—but it’s a fantastic exercise to work those sprint-fiction muscles . . . AND, besides, I love supporting in my own minute way what Suzanne and the ghouls have gotten tumbling with their endeavor.

In researching medical and astronomy terminology, some that I’d forgotten once upon a time (oh, for a 20-year-old’s memory capabilities!), I stumbled across this fascinating fact. Did you know that a “retired” spacesuit was rigged with a radio device and set adrift from the International Space Station in February 2006? I didn’t remember that. Specifically, it was an Orlan spacesuit. And Wikipedia said so, so you know it’s gotta be true. 🙂

Hope you enjoyed pondering the squidgy sci-fi microfiction this week, including Qu’eethi’s possible motives had the “Earth being” made a live touchdown. Do peruse the other Sixty-Sixers this week for a decadent treat, comrades (hey, I’m channeling the Russian spacesuit)!

(In Honor of, and with Simultaneous Apologies to, Valentine’s Day)

Oysters are the very definition of protean, beginning life as plankton and then becoming hard-shelled organisms able to change sex at least once per lifetime (photo by Flickr user Swamibu.)

From a temperate boudoir she comes,

You slaver to rasp slaty cleavage

to possess such a hybrid.

for her “delicate, toothy texture”

But sink this deeply into keratinized mind:

Being so caught up,

she has you shut in her

Inspired by Grammar Ghoul’s Chimera 66 #5 writing prompt. The prompt was oyster, and it probably helps to read the links I’ve provided above and here, unless you have a really good memory from high school biology on bivalves and other sea life (or, obviously, if you’re a marine biologist). Hope you enjoyed this innuendo-, entendre-, and pun-filled (semi-) writing departure; you might still have time to get yours done. The deadline is today (Friday), and there are great writers there already! Where are you?

On the Eastern oyster

And, finally, you might as well take a little trip back with gender-bending father Tiresias (who has “crossed the poles”); excuse the boring graphics–but the audio seems good except for clipping off the very end of the instrumental, which leads inexplicably into “Supper’s Ready” despite them being on different albums

These are “Thai maroon” guavas, a type of red apple guava cultivar. Image in the public domain, by the U.S. Dept. of Agriculture.

You want me for

able to be quashed

under the press of your flesh.

You’re convinced my fruits will mummify

without your potable vigor, sure

my feathered veins will wither.

Still, I propagate in any soil

This poem—which probably would have been titled “The Botany of Desire” if Michael Pollan hadn’t used it already, darn him!—was inspired by last week’s Grammar Ghoul (Chimera) 66-word challenge #4, whose deadline I missed a few days back. My advance apologies for the formatting in this; I’m not an html expert.

The prompt word was guava, as you might have guessed. For more on this fascinating fruit, you can try the University of Hawai’i Knowledge Master database on pests, crops, and much more, as I did. And also be sure to visit Grammar Ghoul Press, which has a garden-ful of weekly prompts, boys and ghouls.

“It’s by Francis Bacon,” Mialy pointed to the violet hologram and elevated her voice, “ ’cept for the shrieking, of course. That’s a modern addition.”

“Wait! The Francis Bacon? The one who invented everybody’s favorite sizzly meat that almost nobody is able to get their hands on anymore?” Joba snickered. “He sure did a lot of wildly different stuff in his lifetime.”

The screaming subsided as Joba spoke, but the New Memphis Art Museum & Distillery hum-spun sound within its walls, smothering the tortured yells for the next patrons.

The building itself had been dubbed “acoustically perfect” through stringent certification channels. One’s ears could only be thankful the hologram of Munch’s famous disconcerting painting was housed in a faraway room.

“No, goofball. It’s some other Bacon according to Teacher Farflung’s notes.” Mialy moved her neck from side to side and it cracked as she attempted to get the implant into better position. “I told you, you should have gotten the neural implant at the door. Teach will not be pleased, if it’s monitoring this field trip out there somewhere.”

Mialy thumbed over a shoulder, causing mauve hair to swing a seeming pendulum behind her head.

“Hmm. I thought they were supposed to be motion- and heat-sensitive to a particular genetic pattern,” Joba muttered.

“Oww, that chair guy is giving me such a hunormous head-ouch,” she typed hurriedly onto the tablet, afraid the wailing would start up again at random.

Joba nodded. “Or maybe it’s the imp. I’ve heard of brains that reject the injection . . . “

“Nah.” She interrupted. “Just listen! Whadda you figure’s his problem?”

“Access your hoytay-toytay mind-friend, why don’t you? Harness alllll the benefits of your tech,” he mimicked the booming voice in the jingle for TechUnique Products. Mind-fiend is more like it, Joba thought.

Mialy nearly shouted again. “I know, but I wanted to figure it out myself. Art’s effect is personal, y’know. Some people get pain from art, especially this holo-painting. Some reap pleasure. Some get both. Art’s supposed to provoke, amiright?”

“Yeah, but with the whole pain/pleasure thing, art reminds me of drugs.”

“Uh, well, yeah, I guess it’s like those drugs that mold to a person’s genetic contours. Personalized psychotropics.”

Joba fiddled with his tablet. “Howya access the data on, um, what’d you say the artist’s name was again? Franks’N Bacon?”

Snickers seemed to trigger another blood-in-a-centrifuge moment courtesy of the now-popping hologram.

“You know,” Mialy made a tunnel of her fist to amplify her voice, “I think the screams are changing. You hear it? But why?”

“Just a bug in the programming,” Joba offered.

“Anyway, let’s get going. We’ve got lots of art to partake of today, my lady.” He pulled Mialy gently by the hand and past the room sensors that guided the advanced acoustics of the 19th and 20th Century Modern Art pavilion of the museum.

In an interior room adjacent to the artwork informally called “Screaming Pope,” two people are at work.

“Ay, Segala, you can go easy on the audio now,” Rayson shouted to his colleague from well across the room.

“It’s no use,” she called back, letting the arm drop to the side of the chair.

“Damn. That’s the sixth audio to crap out this week, and it’s only Wednesday.”

She shook her head slowly. “I know, tell me about it. Hope we don’t get a lecture from Kathy. She’s a beast when it comes to protocols.”

Segala tugged on the straps, but nothing gave.

“Ray, can you help me get the electric nails out? It looks like I accidentally blew a vein. Don’t slip on her hair . . . anyway, we’ll have to pick up another volunteer on the way back from the DR.”

“Yup, I sure hope the next one holds up longer, for both our sakes. And is less messy. You just never can tell by looking when you’re gonna get a spurter.”

“Yeah, and it seemed like those last patrons were beginning to suspect . . .” Segala’s voice trailed off.

The wet echo of a thump came, and then only a prolonged squeal-screech of a cart on wheels. As the two left the room, a resonant door slammed behind them, complemented by a piping up of hidden music, which was believed to encourage employee tranquility.

“I think to myself/what a wonderful world” serenaded the duo down the hallway, although neither had a clue who the singer was.