My Feminist Family on the Prairie (yes, men can be feminists, too)

Believe it or not, there is a connection between feminism, bicycles, and fiction. Witness the fiction anthology Biketopia: Feminist Bicycle Science Fiction Stories in Extreme Futures from Microcosm Publishing, an anthology now in its fourth incarnation. I am proud to be an author in the fourth Biketopia, and I’ve got a favor to ask on behalf of all the authors and the publisher.

But first, a little bit about the latter. Microcosm Publishing, whom you can find on Duotrope, on their Web site, and all around the social media sphere, occupies a subversive publishing space—if feminism, LGBT rights, veganism, mental health, and a punk attitude qualify as such. Book titles upcoming or already published by this Portland, Ore., company include: Trump: A Graphic Biography; Cats I’ve Known; Out of the Basement: From Cheap Trick to DIY Punk in Rockford, IL, 1973-2005; Bikequity: Money & Class; and The Reason I Jump: The Inner Voice of a Thirteen-Year-Old Boy with Autism. For myself, I was drawn to a publishing company that’s been around more than 20 years and supports women who write while making a statement of engagement with our environment, politics, music, feminism, do-it yourself, relationships, and so much more.

But there’s a small hitch to Biketopia four. It’s not completely funded. Not yet.

This is where you come in!

There’s a crowdfunding campaign at this very moment to ensure it makes its way into the world. Featuring 11 stories and a batch of reviews that are dystopian or sometimes even utopian,  Biketopia: Feminist Bicycle Science Fiction Stories in Extreme Futures awaits full funding.

I cannot speak for the authors in this anthology, but as a writer among their number, I can say that my story focuses on a dystopian future in arid, desolate Colorado. Inspired possibly by subliminal crossflow from too many “Twilight Zone” marathons, I wrote about a protagonist who owns and runs a dusty diner alone but for two canine sidekicks. Then, she meets someone, and everything changes from there. So, pretty simple plot, without giving too much away.

Looking at the other story synopses, I am stoked to read Biketopia four, which includes a few comics within as well. Here are a few story blurbs from the Kickstarter fundraising page:

May the Fourth Be With Us, and How You, Too, Can Submit

Please consider supporting Biketopia four via the Kickstarter drive; with a minimum of $10 you get the latest anthology. With a donation of $25 or above, you get all four Biketopia anthologies. The goodies abound, with a variety of levels from which to chose.

I’d be ever so pleased, not just for myself but for the mission of Microcosm, if you’d consider donating to the campaign and checking out Microcosm’s site. In addition to the previous book titles mentioned in the intro, you’ll see that MP offers up ezines to coloring books to stickers for your bike and all kinds of books including self-help and vegan recipes inspired by Morrissey (whose band, The Smiths, are no relation to me, sadly).

Finally, Biketopia five is, ahem, gearing up for action, too. Through March 1, you can submit your feminist-inspired science fiction (though you need not be female or identify as such) stories of 2-6K words, to Biketopia five, with a theme of “Intersections.” In fact, they say “We especially welcome submissions from writers of color and transgender and nonbinary writers, and seek stories that portray more diverse perspectives than are classically found in sci fi.”

So, get on that seat and ride your creativity into worlds unimagined! 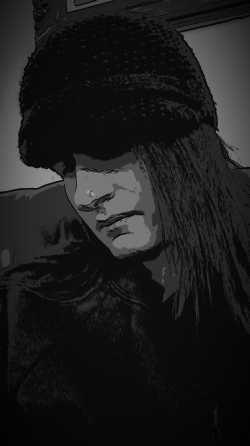 Election results got you down, Leigh?

Reports of my demise have been exaggerated, I’m afraid. In fact, there I am over at the right, looking pensive, as opposed to looking Pence-ive, which is just gross.

Over the last five weeks or so that I’ve not blogged, I’ve been both working hard and hardly working. A new job—copywriting—is occupying a lot of my time so I haven’t gotten to do much creative writing (or responding to your blogs) of late. In fact, in terms of fiction, I submitted only five pieces for publication in January.

But amid the flus and allergies and product descriptions and torn knee-parts (husband, not me) and holidays, I’ve managed to get my second horror fiction piece published in a free ezine newly rechristened as Shotgun! Strange Stories, a publication of DeadLights Horror Fiction Magazine. I’d call the story, Volume 2, Issue 2 (27 January 2017; cover depicts two skeletons at a door and says “Featuring ISOLATED written by Kyle Lybeck”) a radical departure from my typical protagonist: this character is a right bastard, I think my British friends would say. Possibly with no redeeming qualities, but I hope the story manages to convey . . .  something. I’ll leave that something up to the individual, however!

I received several book-gifts for the holidays (the very best kind of gift), from poetry to short story collections to biography (Phil Collins, I’m looking at you, against all odds).

So-so-sodio (you have to sing it), I just wanted to give a brief update and a swift kick in my own tuchus. I am hereby making a half-way commitment to blogging two times a week. I’m sure you’re all thrilled, yes? 🙂 Two, yes two. These posts could be anything. Fence posts. Post offices. Post cereal.

Moving along . . .  I’ve been trying to save my dollars and pounds to support indie authors like some of you (I wish it were more; I truly do). Hence, the latest arrival.

Congratulate, cajole, coax, consult, or converse with Hugh at his blog, Hugh’s Views and News, where you can also get this book (a short story collection chock-full of horror, science fiction, weirdness, and drama galore).

Way to go, Hugh, as to all of you living the creativity dream. I’ll see you around.