The King is NOT dead. In fact it is his birthday today (21st September). He’s 69 years old. No joke (crude or otherwise). 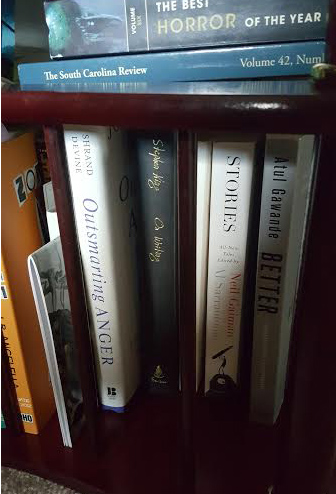 I’m not talking about Elvis, but the master fiction-writer Stephen King. Otherwise known as He of the eternal bestsellers list. Or maybe Scary Writer Guy.

If Mr. King hasn’t been on “The Simpsons” yet, please, somebody call Matt Groening. A scenario involving Itchy and Scratchy interviewing him, and perhaps literally being slaughtered by his words.

As for me . . . If given a few minutes with Mr. King, although there is much I would like to ask (including about language choices!), I should perhaps first offer him my hearty thanks.

In thinking about King the icon on his birthday, I am drawn to how many ways I owe someone I’ve never met, and am never likely to, my gratitude. Here are just a few. A tiny token. A kind of not-yet reliquary object; the moving finger, mid-writ. A curled, disintegrating pink sheet of paper, my treasure.

1. It’s not about me. It’s about the bottle (if not the battle). Sometime last year, I read King’s (perhaps, although I hope not) conclusive novel in the saga of Dan(ny) “Doc” Torrance, Doctor Sleep. It makes so much more sense now. I can finally write it, nonfictionally, too: I am the child of an alcoholic. Curiously, it feels good to be truthful.

2. Have you read On Writing: A Memoir of the Craft? Really, there are too many gems in this short, leanly titled book to carry away in armfuls. To write, you have to read. Dogged persistence is key. Hammer at the words until you’ve fashioned something new—accessing a big, green god of ecstasy perhaps. You will survive; he (and his brother) did, after all. (Including the farting babysitter.) This book has saved me missteps I did not even realize were steps.

3. The pink sheet of paper, you ask? Circa, oh, 1989. Rest assured, it’s in storage. Not lost. Never lost. Dragged to a bingo game for the umpteen and first time as a child, I had two choices to make, both appealing: read or write. Thanks to reading King (and not always understanding what was beyond my range to understand), I nevertheless started turning to writing. On pink bingo programs or any scrap I could find. And, lo and behold, I became better at it (at least marginally, no pun intended) the more I did it. It propelled me in ways that being a sort of invisible raggedy-child of a dysfunctional family did not. Death and suicide, I saw through the veil of prose, were a termination. Not a clean and strings-free release. I, too, persisted.

So, world, you have Stephen King to thank (or stone) for my finding my way to the present me.

Unbraiding the strands of self from the writer is difficult to impossible at this point. At least, in that, I am thinking King and I are on common ground.