From the Missouri Botanical Garden’s Chinese Lantern Festival; all taken by me with the Smartphone: 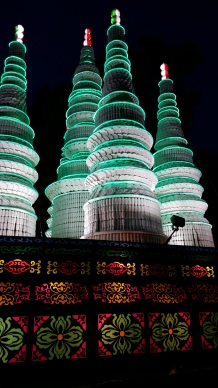 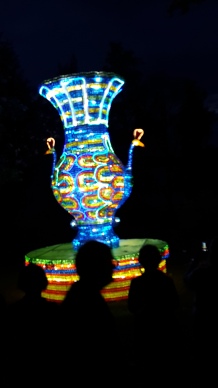 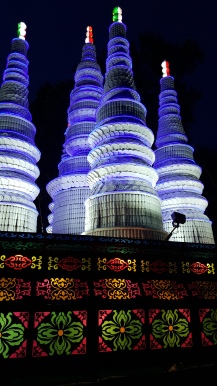 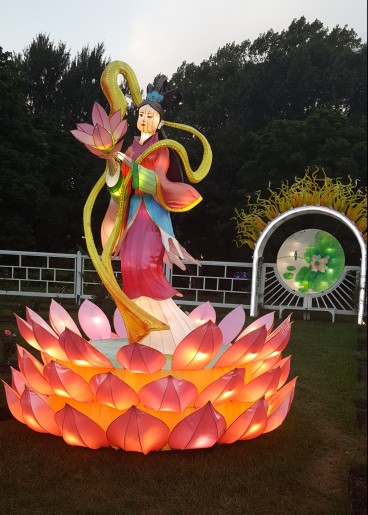 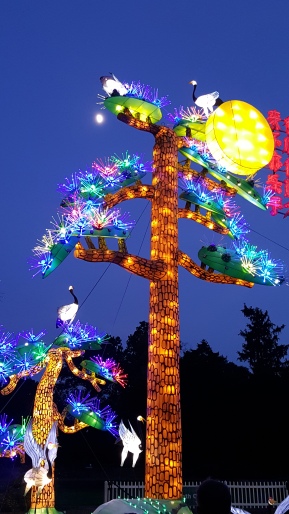 Not only are the butternut squash anemic-looking, but now they are writhing. The novice gardener had noticed that the vines had been in decline for a couple days. She’d wondered whether the wilting meant they needed to be watered more. She had surveyed her raised beds at a remove, not getting 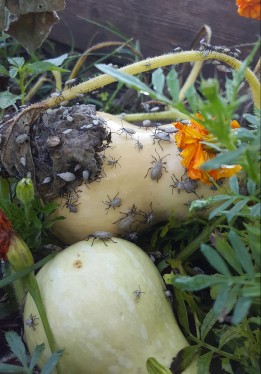 her fingers or eyes down into the dirt.

For which she paid dearly.

On Day 1, The Scourge made their presence known. Legions besieged the squash that had once thrived. 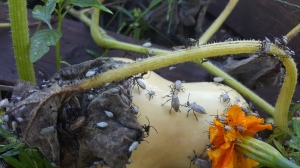 The war had begun in earnest.

The Garden Avenger was born.

As fortuity would have it, the Avenger had a bag—and then some—of diatomaceous earth, a natural solution she used for dusting her duck coop.

Bellows in a steely vise, she wanted to feel as light-hearted and buoyant as Dick Van Dyke in “Mary Poppins.” She wasn’t. So, she went a’poofing (no, not that kind, definition 2).

After 30 minutes spent squash patch–squatting, she had made that section of the garden look like Narnia during the Long Winter.

Insectoid forms skittered and scattered far and wide. Victory had been seized from the pincers of defeat!

The fecking foe had returned after a few hours. Presumably some had scuttled away and succumbed to the pale pixie dust.

The land was again white.

And the persevering pests returned, trying to make inroads in the melon patch.

The Garden Avenger shrieked within: “Oh, hell no! You do NOT take my watermelons!” (Again, novice gardener that she is, she had never gotten a melon to reach full maturity and loved—nay, worshipped—the sweet red ambrosia as much as Ralphie’s old man in “A Christmas Story” loved turkey. Yes, indeed, squash bugs were the Garden Avenger’s version of the Bumpus hounds!)

The Avenger promptly went into full-on “Après moi, le deluge” mode, spraying far and wide, chasing each little blighter as it tried to flee under a leaf, along the garden board, under the garden board, or into the snake’s den in the splitting railroad tie flanking the upper garden.

In the Garden Avenger’s mind, the work was either done or, as per her trusty Farmer’s Almanac, the level of infestation was so great, it was time for more drastic measures.

This day, Mister Green-Eyed Hornet Lantern Arrow Man made an appearance, because the Garden Avenger was busy slaying the Green Blades (of Grass) gaily swaying. (Okay, they were mocking.)

And then, she could take no more as the wary wrigglers returned.

Pity had fled. She vowed to slaughter them all.

She chased, and she crushed. She felt revolted and merciless when one body exploded in a pus-green confetti-sludge, then the next. Then the next.

Tiny ones. Slow ones. Fast ones. Old ones. Gray ones. Brown ones. In the back. In the face. Some separated into segments, head and body asunder. Some merely . . . smeared.

She wanted them gone. Yesterday.

Mister Green-Eyed Hornet Lantern Arrow Man had suggested a blow-torch, but lacked some of the parts needed after searching the shed.

She rationalized that she had saved them from fiery deaths. After all, they are called squash bugs, she punned. They’re meant to be . . . well, squashed. Right?

That night, her brain lay awake, wriggling, worrying, troubled by her malice. She knew what would need to come next.

It needed a burning.