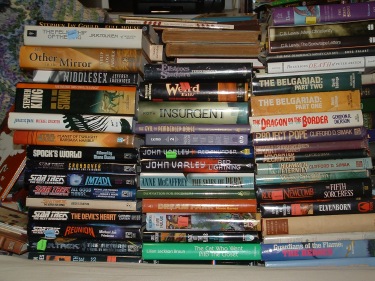 So many stacks, so little time. (And this is a small one to select from, in the “library”!)

For no particular reason other than word-love, here are some quotes on writing, perseverance, and the writing life. Some are also beautiful examples of writing. I hope at least a few are ones you’ve never read and they encourage you to seek out more from that author, if s/he is unfamiliar to you.

QUOTES from (in no particular order)

I Have Words to Spend: Reflections of a Small-Town Editor, Robert Cormier, ed. by Constance Senay Cormier, Delacorte Press, 1991.

Bird by Bird: Some Instructions on Writing and Life, Anne Lamott, Pantheon Books, 1994.

The Paris Review, Interviews: Louise Erdrich, The Art of Fiction No. 208

“Bunnies with bombs,” she says; I say: like a good book!

I write rough. And judging by the spate of rejections in the last 8 months, quite rough.

But this post is not about that. It’s my 100th post—pop the literary corks, y’all—and I’m reflecting on the past year and five months that I’ve been blogging on WordPress.

First and foremost, I thank you all again for being here.

Suffice it to say, I never expected to get to this destination. This writing-and-sharing-my-angst depot is a surprise, but a welcome one.

I never expected you wonderful 200-odd folks to trip the lines, occasionally fantastic, along with me, from my first few tenuous, nonfiction baby-blogging steps into full-blown fiction and what turned out to be a serial novella, called “Undelivered Valentines.”

My nebulous goal, I can safely say—to write more regularly and, moreover, to take gut-twisting chances with my fiction (and the occasional poem or nonfiction piece), including submitting it to applicable publications and contests—has been achieved, gang-busters.

Spooling through my Submittable account (one of the leaders in content-submission systems for fiction and poetry writers—hint, hint—along with others like the up-and-coming publishing platform Medium), which nevertheless doesn’t embrace all the legwork that I’ve done, I see I’ve submitted to at least 10 publications and/or contests since late November 2014, which exceeds what I’ve been able to do in the past, working within only a wedge of part-time. Several times, I’ve tried the same market; I haven’t pitched the same piece each time, but I have re-submitted. You know what they say about not succeeding the first time . . .

Speaking of submissions and rejections: if you are a writer, are you making time to resubmit your work? See Damyanti’s provocatively titled “Do You Submit Like a Man?” for inspiration.

That said, I have even had the good graces to not submit a piece but be approached to have a poem appear (titled “Bivalve’s Love Song”) in a literary magazine. This time, it was in Grammar Ghoul Press’ spring 2015 issue of The Ghouls’ Review.

Along the way, I have received numerous and invaluable feedback moments from editors, guest readers, beta readers, and many among you. I have also done a good deal of reading, although a person can never do enough of that! How does a writerly gal get so lucky?

Yep, I’ve left it all on the page and now am hollow. Time for a story re-fill!

In short, my year-and-almost-a-half blogging has been “bunnies with bombs,” a phrase suggested by my thoughtful and funny daughter (who has not, by the way, seen “Monty Python and the Holy Grail” or its rabbit of Caerbannog). I suppose it’s fitting, as my Chinese astrological sign is that of the {presumed creative} rabbit. (All in good fun, my fellow STEAM-loving friends!) So, something agile and prolific linked to something painful, life-changing, and even lethal, making for quite a novel combination. Yep, that pretty much sums up what writing fiction and nonfiction (and drama and poetry, for that matter) require. Blood on the keyboard, tornadoes in the brain, tears on the cheeks, and vim, vinegar, and perseverance in the veins.

And so, a final toast: here’s to many more years, friends.

Let’s do what you fear most,/That from which you recoil/but which still makes your eyes moist.–attributed to Lou Reed

O at the Edges

An evening with poets Chip Dameron and Robert Okaji

Some of you may want to jet in for this event. Or not. Chip is certainly worth the effort!