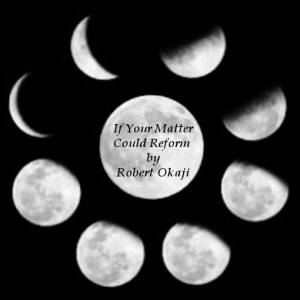 It’s April, National Poetry Month, and I want to think of poet Robert Okaji’s new chapbook, If Your Matter Could Reform, as a song cycle. It does, after all, make music of the words with which we gird our lives: “In the marrowbone of night,” he writes, “your song parts the fog.” [“Trains”]

It’s not any casual poetry, crammed with namby-pamby rhymes and beats, easily forgettable and born-discardable. Like the best, it’s steeped in Stygian waters, chipped at by the fine, diamond-point of time, and polished to an exacting degree. You might begin to wonder ‘where’s my place’ wrestling with these words. And, oh, the words! Let’s not overlook those.

The chapbook’s title stems from the subjunctive mood: “if” this hypothetical or contrary reality could happen, then something equally magical follows. This conscious naming choice places the chapbook on prosodic terra firma. The subjunctive is the very expression of doubts, wishes, desires, regrets, and requests. What a perfect spot in the universe from which to peel back the curtain and show a reader a bit of the poet’s wheelhouse!

This book, available now on download through Dink Press, is not packed to the gills with snobby, high-falutin’ poetic argot, but it needn’t be. To paraphrase another poet, its fresh directness gets at where the deep-down things live, though it is neither emotionally or intellectually doused nor tamped fashionably.

From twinkling stem to stern, this chapbook moves: in and through itself, outside itself, through you, and through time.

“To sweeten the dish, add salt. To bear the pain,

My mother brought to this country a token of her death to come.”

Readers of Bob’s blog, O at the Edges, will feel a favorite-blue-jeans kind of familiarity to the poem “Ashes,” which is probably, along with the more traditional, one might say, love poem “Nine Ways of Shaping the Moon,” at the highest-water point in the chapbook for personal (brushing up against confessional) poetry. Although I’ve never met Bob in real life, I get a sense of his actual flesh-and-blood voice, timbre, pitch, pattern, in these two poems in particular. I would also add “Earth’s Damp Mound,” which I was fortunate to read in Bob’s blog in the past year. But these two pieces plumb the emotional depths as they must, in matters of regret and remembrance, both personal and the hinted-at historical, as in “Ashes,” and shoot to a zenith when the narrator himself implores his beloved to “Talk music to me. Talk conspiracies/and food and dogs and rain. Do this/under the wild night sky.” [“Nine Ways of Shaping the Moon”]

Perhaps the quintessential question in this 16-poem volume prods you out of any complacency as a reader and, if you are a writer, drives your courage back to the sticking place: that empty page. “Are words ever enough?” [“If We Burn”]

There’s a Shakespearean sonnet here, too, where “Nothing is everything, but before.” [“Nocturne with a Line from Porchia”] There is ample praise of gravity and of lives well lived and written, even if “the words find[ing]themselves/alone, without measure,/without force, and no body to compare.” [“Earth’s Damp Mound”]

It seems to me that Bob’s friend and mentor, Prentiss Moore, eulogized so eloquently here [“Earth’s Damp Mound”] and elsewhere, would applaud the herculean effort of the chapbook—it goes a long way toward elevating the diminished thing (one’s life sifting by and any accrued regrets) and reforming both lost matter and memories. What more could an author ask of him or herself? What more could a reader want beyond a hushed “come over here and let me share my hard-won secrets with you” from a wise friend or confidant? If Your Matter Could Reform might be the key fob to the private kingdom in that regard.

Texas poet and one-time bookstore owner Robert Okaji frequently shares his original poetry and thoughts on other bibliophilic interests at his blog: O at the Edges. His first chapbook, If Your Matter Could Reform, is now available for digital download from Dink Press, via their Etsy shop, for a mere $1. Think of it as caffeine direct to the intellect, and at well under the price of a traditional cup of coffee.  Print versions are slated to be available April 19, 2015.

10 thoughts on “Poetry Review: Robert Okaji’s If Your Matter Could Reform”