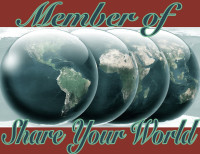 I thought it might be nice, for a change, to blog about me, assuming I’m nice, which of course is a big assumption. So, in the absence of protests to the contrary, here goes with Cee’s weekly Share Your World (SYW) challenge, with an ultimately far-out flavor to it . . .

And now, something else to be grateful for, some far-out supermoon stuff (wouldn’t mega-moon sound better? it alliteratively appeals to my sometimes tinny ear) . . .

Image by me — & Photoshopped, unexpertly, to sharpen, bring out contrast, & brighten — of the Aug. 10, 2014, #supermoon. Really wish I were a better photographer & had better night exposure ability. Dumbly, I also didn’t use a tripod, other than my knees. The exposure is about 5 seconds. Had hoped you could see how the moon looks (to me, anyway) like a dragon’s eye & all the altocumulus clouds (I’m guessing, but please correct me, meteorologists)  looked like individual scales around the dragon’s eye. Anyway, it was cool to see an astronomical phenomenon like the supermoon, & I am grateful for that. For more on the supermoon (thank goodness it’s not dubbed the perigean moon supersized, for acronymization!), EarthSky is one great resource.

10 thoughts on “Share Your World: Week 32, The Supermoon Edition”