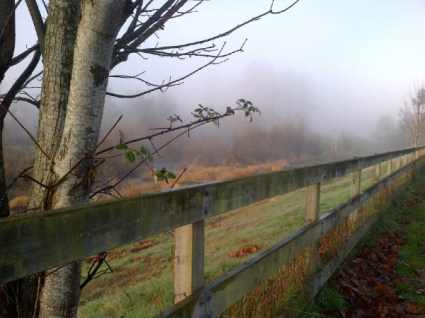 Photograph courtesy of and copyrighted by Erin Leary. She writes, too. Go visit her!

His field filling up with fog that clung like a kind of cloudy cobwebbing to the tines of the mountain maple, hemlock, and white pine.

“Bah, those times are long-gone!” William Wallace MacIntyre, whose granddaddy Robert had a hand in naming him after a rumored relative, shoved the old photo back into a bulging envelope marked Family Memories 1951-1975.

Misty-Lyn’s baby will never grow up to see fingers of light tracing a ridge of sprawling, awing yellow and auburn. Never fish or take a dip in a sky-clean stream. The only mountain lights that child will ever see will come from them damn machines!

He winced as he worked the stick he’d cut earlier that month, pearl-handled pocketknife sliding and shearing as nimbly as ever, only pausing to sandpaper with the final touches later in the day.

“Well, we’ll see who has the last laugh this time.”

A grim chuckle escaped thin lips choked by wrinkles, as if ivied.

“Let’s go thu the big spot agin’, Gran-daddy!” Misty-Lyn’s cute gap-toothed smile swam up gradually from memory as he finished the walking stick by hand-winding a leather grip at the top and putting on the cap-piece: a phoenix . . . with a little extra spice, he thought. That through-mountain “spot” tunnel, too, would be taken out by Reed’s project as it thundered down the hollers he loved.

He thought of Misty-Lyn and her baby again as he struggled to his feet with his own newborn creation. The press and the CEO’s entourage would be there soon, and he didn’t want to be late to meet Mr. Reed.

Tuning out the old man’s yarn, Glenn Reed instead zoned in on the cursive “do unto others” painstakingly burned into the masterful walking stick and the birdy motif on the top near the grip, evidently leather, fantasizing if there might be some way to monetize the old coot’s obvious woodworking skills.

Maybe a series of on-demand subscriber videos, with different levels for different dollar-values, he mused.

When he saw Mr. MacIntyre’s cane rising, rising, through a molasses of air, to tap him in the dead-center of the chest, the last thing he expected was for his world to go ear-splittingly dark.

Written for Rochelle Wisoff-Fields’ weekly Friday Fictioneers challenge. This is way, way overlong (by almost 4 times, clocking in around 398 words). If you are curious about either mountaintop mining or the legend of Cole Mountain Light (as a North Carolinian, I had as my original inspiration the Brown Mountain Lights, but the Old North State didn’t work as a setting here), check out these links.

7 thoughts on “A Memory of Mountains”