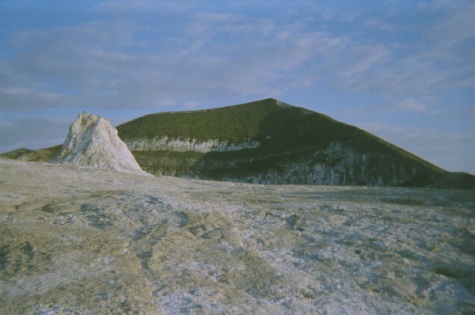 Photograph by Danny Bowman, of Ol Doinyo Lengai in Tanzania, Africa, “the only volcano in the world that erupts natrocarbonatite lava,” according to NASA. The lava is “extremely cool . . . and relatively fluid.” Note that I did not use the actual location of the photograph (and I imagined “Hornmouth”) to write my flash fiction. In fact, I noticed the location only after I had written this story and when I downloaded Mr. Bowman’s photograph for the Friday Fictioneers flash fiction challenge.

Lovers’ subduction and the letters of Shelley

Bringing a bird up here is daft.

James knew he shouldn’t have let Gavin wheedle him into it. Not only was it a difficult hike—if they legged it, some 12 kilometers from Hornmouth—but would anything come of it?

“The letters of Shelley,” Gavin had said then chuckled.

In reality nobody knew where the famed lost letters of the dead Romantic poet were buried.

Finally the mist stopped long enough to reveal that the crater-sprinkled ground had subducted in some spots. Nearby a miniature mountain, several Sisyphus-sized boulders were strewn, but one erect column adjacent demanded their eyes.

As the couple neared, they could begin to make out the etching.

The word Ozymandias and more text snaked down the earth-upshooting.

Taking out his mobile for a snap, James concluded, “Blymie, who knew Shelley was a vandal?”

I go over the word limit, but this flash fiction was nonetheless written for Rochelle Wisoff-Fields’ Friday Fictioneers’ Challenge of 7 March 2014. I encourage you to take part!

5 thoughts on “Friday Fictioneers: On the letters of Shelley”